A rental property owner in German Village was faced with a difficult situation this week: an external gas leak and unhappy tenants with no hot water on one side and site manager from Columbia Gas on the other informing him in no uncertain terms that they would not repair the leak in the service line until Columbia was allowed to move his gas meter from the inside to the outside of his pristine double down on East Kossuth. 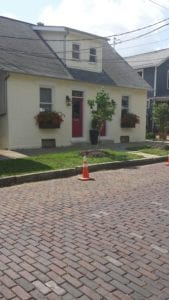 He did what we hope all property owners in such a predicament do: he called the German Village Society and said “help!”

I had him explain his predicament in detail and ascertained that he absolutely did not want his meter relocated to the exterior of his building. I explained our Formal Complaint against Columbia Gas and where we stood currently in the process. You’ll recall that on Aug. 7, PUCO said Columbia can’t force any more homeowners to move their meters until our settlement talks are complete.

I then contacted our legal counsel to get their advice on this Kossuth situation.

Arriving on site, I met the property owner and provided him with a copy of the order from the PUCO preventing service shut-off should he refuse. I then informed him that he would have to clearly state his refusal to provide permission to relocate his meter to a representative of Columbia Gas. I also provided him with the form he would need to complete in order to join our Formal Complaint against Columbia Gas. He immediately filled it out, borrowing a pen from a member of the Columbia Gas crew on site.

While the Columbia Gas crew stood patiently by, we made calls to the Director of Service Monitoring and Enforcement at the PUCO, our attorney, Executive Director Shiloh Todorov of the German Village Society and the External Affairs Specialist for Columbia Gas.

I also made a few calls to our friends in the media should they wish to capture what certainly would have been compelling visual footage.

Fortunately for our homeowner, his quick action paid off, in spades.  Columbia Gas did the right thing and instructed the site manager to repair the leak in the service line but leave the meter indoors. The Columbia site manager was exceedingly polite about the whole thing and for that we were all quite appreciative. 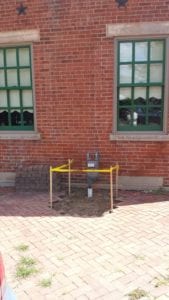 Alas, the former home of the German Village Society at 624 S. Third St. did not experience the same fate.

Please, if you are approached by Columbia Gas, even under undue pressure, to relocate your meter from indoors to an exterior location on your building, refuse.  And if you have not yet done so, please join our Formal Complaint. I am sure Columbia Gas will loan you the pen.