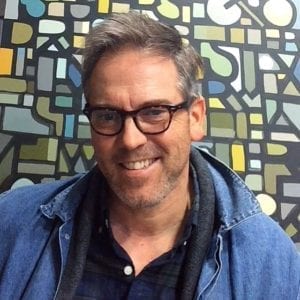 Derrick Hickman has chosen the familiar images of childhood toys as a vehicle to survey memory, self-doubt, and societal comparisons. Particularly through the scope of media, advertising, and merchandising. After all, these are our introductions to being “sold”. Where we first learn to weigh ourselves against others, whether it be our possessions, life style, or happiness. His paintings are intended to draw the viewer in to the work through the representation of iconic playthings that cue nostalgia, whether real or perceived. These images are placed next to snippets of personal narrative and the promises of advertising jargon. Derrick Hickman earned his BFA in Illustration and Advertising from the Columbus College of Art and Design. Later earning a BFA in Art Education and Painting from Ohio University

Q: When did you start working in your medium and why?

The first painting of the childhood toys was created in 2006.  I had been working on my text abstraction series for about 5 years and felt that I needed to build on the theme of memory and identity.  The idea of “toys” as a vehicle for our earliest concepts of “self” seemed like a perfect fit.  These familiar iconic playthings placed alongside advertising promises and excerpts of personal narrative cue a nostalgia with viewers, whether real or perceived.  The hope is to mimic the tactics of the ads that originally promoted these products, and to show how these ideals stay with us into adulthood.

Q: How would you describe your work to people? And how has it changed over time?

Originally, I described the work as Pop influenced, but as the series has developed and I began to incorporate transferred print images into the work, I started to see the work settling into the NeoPop movement.  Initially I was interested in distressed surfaces.  Lots of sanding, burning and scraping in an attempt to emulate worn and aged advertising signs.  As the work has progressed, I’ve been more interested in presenting a more polished  final image.  The distressing is still a part of the creation process, but newer works are finished with high gloss resin to give the work a shiny candy like coating.  Sort of like highlighting the flaws.

Q: What’s your favorite part about your work? What can make it challenging?

I still love the research part of the process.  The process of gathering imagery and planning layout.  It’s like working on a puzzle.   Not being influenced by what other people tell me what I should paint.  It’s always a balance between creativity and commerce.  I often have people suggesting what toys they would love to see me paint next.  It can be tempting to fall into making art that is more salable.

Q: What’s the best advice you’ve ever been given in regards to your art?

I had a great instructor at CCAD named Mr. Hazlerig.  He always said to learn as many techniques as you can, but create a style that represents you.

This is my first experience with the Art Crawl.  I’m very excited to be a part of it.  German Village has always been one of my favorite neighborhoods in Columbus.

Q: If you could have dinner with anyone, dead or alive, who would it be?

I would want to go to The Golden Corral with Tom Waits and just sit back and listen to what he had to say about it all.

GET TICKETS  TO ART CRAWL HERE!!