When reflecting on the individuals that made a major impact on German Village in the 1960s and beyond, names like Bob Gease, Bob Eckel, Steve Shellabarger, and Bob Hurry start to repeat.  All of these men made a profound impact 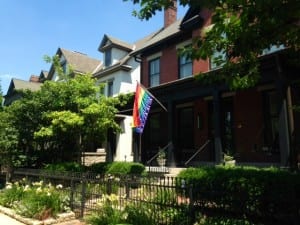 on the neighborhood, whether it was Gease’s role at Huntington Bank, which allowed people in the South End to get loans, or Hurry’s impeccable restorations of multiple homes, which created “Hurryville”, these men all shaped German Village and help make it what it is today.

One commonality for many men that came to German Village in the early years was their sexuality, they were gay.  While this fact was not broadcasted in the open for most of them, it was integral part to whom they were and why they chose to move to German Village in the first place.  The Gay Pioneers of German Village tour is intended to interpret the lives of individuals that impacted the community and whose stories just happen to be intertwined by their sexual orientation.   It is imperative for historic sites to preserve and tell the stories of individuals who are a part of a minority, because these histories are often forgotten and lost.  Through the launch of the Gay Pioneers of German Village Tour, we will be preserving our neighborhood’s history, while simultaneously leading heritage tourism nationally with this innovative tour.

Are you interested in participating in a Gay Pioneers of German Village test tour?  Contact me at smarsom@germanvillage.com or 221-8888.  The July 24th tour is full and the other options are filling up quickly (August 2nd and 10th).  Are you unable to come to a tour, but still want to participate?  Contact me and provide input on who you thought made an impact on German Village.