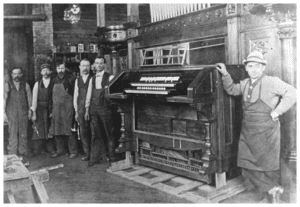 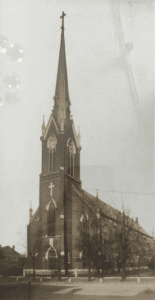 Third Street just hasn’t looked the same for a year and a half. Protective fencing has sealed off St. Mary Church from members and visitors alike. Two Village Lights events and Christmas celebrations went by without the hospitality of the iconic landmark on 3rd St.. The spire of St. Mary Church can be seen throughout the Village and from downtown high-rises facing south where it has beckoned for over 150 years. The summer rose bushes, usually spilling over the iron fence, and its tidy lawn have been blocked off since a catastrophic lightning strike revealed substantive building fatigue and the building was condemned.

The German immigrants who worked in the brewery district – from the brew masters to the ordinary workers – sacrificed mightily to raise $5,000 between 1864-65 for the first building. They raised the gigantic sum of $40,000 to build an architectural gem of German Gothic design between 1866-68. They eventually also sacrificed to erect a large school, a Rectory, and a Convent. 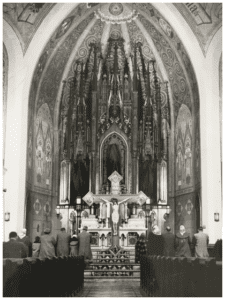 The Church, a center of community life for many Villagers, was a showcase for art and architectural design features from the beginning. There are stunning woodcarvings on the reredos, visible behind the main altar and standing 45′ high and 20′ wide, carved from white walnut by Allard Klooter. Flanking either side of the sanctuary are two 1867 oil paintings by Wencelaus Thein and William Lamprecht of Cincinnati; and paintings by Munich native Gerhart Lamers date from 1930-35. Original stained glass windows are still to be found on both of the stairways leading to the choir loft, on either side of the organ, in the sacristy, in the vestibules and over the doors entering the church. Original Lang Stone steps descend to Third St.; and a 1901 pipe organ with 2,250 pipes by the William Schuelke Company of Milwaukee, all speak to the value placed on craftsmanship of the original local builders. 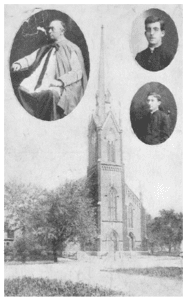