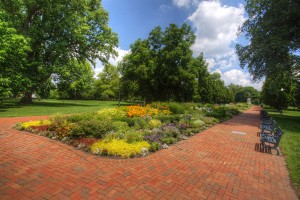 Schiller Park, nestled near downtown Columbus, Ohio in historic German Village, was in a state of benign neglect by the early 1980’s. With the goal of revitalizing the 23-acre park, the German Village Society, The Friends of Schiller Park, the Huntington National Bank, and the Columbus Recreation and Parks Department worked together to create and implement a plan that would closely resemble the park as it existed in the late 1800’s.

Eventually, the partnership’s planning and fund-raising efforts culminated in the completion of one component of the overall park plan – the new Huntington Gardens

The plan for the gardens consisted of a tree-lined promenade containing three centered 100′ x 25′ perennial beds leading from the park’s west entrance to base of the statue of Frederick Von Schiller. The bronze statue, cast in Munich, was a gift to the park and the citizens of Columbus in 1891 from German-born residents.

In 1993 the Huntington Gardens became a reality. The promenade left the drawing board, the site was prepared and 7,500 square feet of flower beds were planted as memorial to the German-speaking people whose community life had centered around the park.

The promenade contains a 450′ brick walkway interspersed with granite stones inscribed with quotes from Schiller’s literacy works. Benches situated on a wither side of the walk, afford visitors a quiet spot to sit and admire the garden’s ever-changing panorama of color.

The majority of the perennials were chosen for their historical, culinary, medicinal ,and decorative value in a four-season design. Many are representative of the rich flora that 19th century settlers found in this area. Reds and golds dominate the color scheme, symbolizing Germany’s national colors.